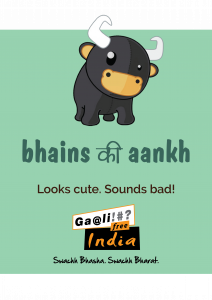 The powerful urge to swear and utter cuss words has its origins deep down in human psyche. They rise out of the swelling cauldron of turbulent human emotions which are in a constant state of friction and tension. When they can no longer be controlled, they spill out through the tongue in the form of swear words. The tongue unleashes a volley of words which, by no means, are sweet to hear, and hurt those to whom they are directed. Not only, do they shake the persons present, but also disturb the calm and peaceful atmosphere. Such is the destructive power of these swear words that their sharp negativity casts a cloud of gloom in the minds of the listeners for a long time to come and portrays a bad impression of the person who utters those words. Though cuss words are in no way acceptable, their increasing use has begun to gnaw the very fabric of a civilized society like a termite, and weaken it from inside.

But it is not only in fits of anger that we utter cuss words. They are spelt in states of anxiety, in jovial moods, and even in utter astonishment. When uttered in those states of mind, they are by no means harmful and offensive in nature. But even those swear words make an indelible mark on people, though for only some moments. Offensive or not, swear words have become not just words, but powerful means of expression and feelings, with numerous connotations and various meanings, when spoken in different social situations. Their negative affects far outweigh the positive aspects and have become widespread in modern conversations and lingo.

Social scientists and psychiatrists studying the reasons behind such liberal use of swear words have come up with results that are nothing but alarming. Curse words, it seems according to research and studies, serve many purposes. Swearing not just releases anger and frustration, but also let other people know how you’re feeling. They channel the emotions inside to flow out as a verbal onslaught and lays bare the hidden anger suppressed within the soul. They also make statements bold and creates a direct and sudden emphasis – statements which otherwise would have been orally spoken sentences.

Whatever the reasons, swearing affects all of us in some way or the other – emotionally, mentally and physically, though the signs are very subtle. Only determined efforts and a cultivated mind will rid us of the habit of swearing and uttering curse words. Let us make a firm resolve not to swear, even if the impulse to swear is very strong. You can always find substitute words and expressions which communicate the same emotions, if you really work around with your language. This initiative to make our language free of cuss words can be an infectious one, if people join hands and swear not to swear. Learn about this more on www.gaalifreeindia.org.