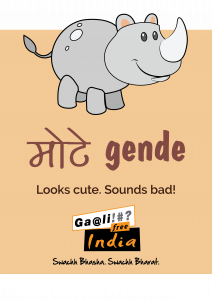 Swearing is so commonplace. We hear it almost every day, in various situations of life. In every single line, every single sentence that is spoken around us, swearing words has become increasingly used in one’s vocabulary. We hear it from friends, family members, strangers we encounter in public places, while commuting in crowded trains, buses, walking or traveling. It seems by the repeated use of swear words that people don’t find it abusive or immoral to use them anymore. Not even adults, children too are using curse words in their day to day language. It is almost shocking to imagine a scenario in the near future, where swearing words are on the tip of every tongue and every thought that crosses the mind comes with its liberal use of swear words. And increasing personal tensions, strife and struggle to etch a decent living, the desire to succeed and difficulty to accept failure, gives rise to an inner turmoil of the mind that acts as a fuel, igniting negativity and hatred among people and spurs them to utter curses and degrade themselves and others.

Such dreaded scenarios are not far off, and if we don’t act today as a community, as a person, and as a responsible human being, we won’t have to wait too long for the day to come. In view of such a disastrous future, let’s delve deep into ourselves and discover swearing in all its ugliness. Since when did we start to swear? Did we hear swear words from someone or did they occur within ourselves on their own? What were the situations that made us swear? Do we swear only when angry, or we swear spontaneously on other occasions too? Questions will make us uncomfortable, for sure. But facing these questions will uncover truths that we fear most and dread to know. It is then that we will see ourselves in a new light. It is this inner cleaning process from which will emerge a new vision of ourselves – a vision that will be pure and devoid of negative forces. This will be the true you and will show you what you were before you wore those cloaks of anger, pride, ego, jealousy and acquired all those negative energies that started to get attracted to you like a huge magnet.

Swearing occurs in the mind. It all begins when we hear and pick up strange sounding words consciously or unconsciously from our peers, elders, friends, strangers and try to comprehend its meaning. Quite often, the meaning or its connotations will become evident from its tone and the situations under which those words were uttered. It gets ingrained in our thinking process unconsciously, over a period of time. Once it takes its hold on our psyche, and when we hear those words again and again, it becomes a part of our unconscious brain and then it does not require any effort on our part to swear. It comes naturally to our tongues and becomes part of our natural conversations. Neither we realise that we are swearing, nor are we able to figure it out why do we utter such words in the first place. We do not find anything wrong in swearing. And when asked the reasons, our mind invents arguments and builds a web of logic to prove why swearing is just no problem at all!! We justify our swearing and transfer the onus on the society and its evils. And it is true to some extent. Isn’t it!!

To escape from the evil clutches of swearing needs a firm focus on moral values and a determined effort on our part to let go of this bad habit. It is an initiative that springs from within ourselves. Supporting this initiative, www.gaalifreeindia.org is a platform to free India and its population from the vices of cursing words and bring some purity to its languages. It gives a social impetus that eggs us on to develop a gaali-free India.

Learn about this more on www.gaalifreeindia.org.